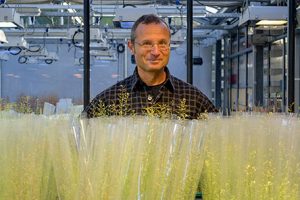 The e-conversion member Professor Dario Leister (Chair of Plant Molecular Biology at LMU Munich) is Corresponding Principle Investigator of the project “PhotoRedesign: Redesigning the Photosynthetic Light Reactions”. The ERC’s Synergy Grants are intended for teams of 2-4 researchers, whose interdisciplinary collaboration promises to lead to great advances of the current state of the art, thus pushing the frontiers of knowledge. Synergy Grants are worth up to 14 million euros and are disbursed over a period of 6 years.

The project to be undertaken by Dario Leister and his colleagues is nothing if not ambitious. Entitled “PhotoRedesign: Redesigning the Photosynthetic Light Reactions”, it aims to enhance the efficiency of the molecular processes that underlie the phenomenon of photosynthesis. The primary goal is to increase the yield of biomass per unit input of solar energy beyond that currently attainable in photosynthetic organisms, such as cyanobacteria, algae and plants. Plant photosynthesis uses solar energy to split water molecules, obtaining electrons and protons from the hydrogen and releasing molecular oxygen. The protons drive the synthesis of the high-energy compound ATP which is ultimately employed, together with the free electrons, to convert carbon dioxide into sugars and other vital biomolecules. The project team aims at developing innovative strategies to boost the fraction of solar radiation captured by what is known as the light reaction of photosynthesis.

This approach will make it possible to improve the levels of carbon fixation attainable, thus increasing the yield of biomass that can be harvested from algae and plants and used as a sustainable source of both energy and food. The multidisciplinary character of the project takes account of the complexity of the task. LMU’s Dario Leister will serve as Corresponding PI. The other two Principal Investigators of the project are Professor Josef Komenda of the AlgaTech Center in Trebon (Czech Republic) and Professor Neil Hunter at the University of Sheffield (UK).