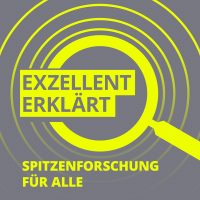 We proudly present the first podcast of the German Clusters of Excellence!

It regularly reports from one of the 57 clusters that are funded as part of the Excellence Strategy of the German federal and state governments. The journey goes right across the country and the topics are just as diverse as the locations: from African studies to Future of Medicine to Quantum Science. The researchers of the clusters of excellence talk to podcaster Larissa Vassilian about how they want to find scientifically sound answers to relevant topics of our time – for the society of tomorrow. The podcast concept was developed by a team of ten science communication experts from ten Clusters of Excellence – including e-conversion and two more Munich clusters, MCQST and SyNergy. You can find the German-language podcast on all popular platforms as Apple Podcasts, Spotify, Google Podcasts, Amazon Music,… Or visit the website: www.exzellent-erklaert.de 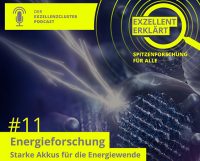 In 2030, more than ten million electric cars will populate the roads in Germany. And all of them will need a powerful, fast-charging and safe battery. How is that going to happen? In this episode, Prof. Dr. Bettina Lotsch and Sina Stegmaier provide insight into battery research. What are the problems of current rechargeable batteries? And how could they be solved? The two chemists from the Cluster of Excellence e-conversion also explain how batteries actually work and what materials are needed for a high-performance battery. And they reveal what solid-state batteries are all about, in which the automotive industry in particular has such high hopes. 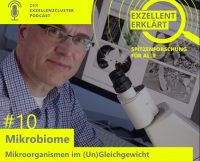 Exploring the microverse is all about the communication and interaction of tiny creatures with each other and with their environment. This is because they have often been living together for millions of years and are rarely found in isolation. Prof. Axel Brakhage from the Cluster of Excellence Microverse (Balance of the Microverse) can imagine that the next antibiotic agent may be waiting to be discovered in our front garden. And from this, in the best case, a drug can be developed that specifically attacks undesirable microorganisms and does not affect the beneficial ones. 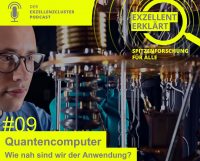 Michael Köhl and Sebastian Diehl research the fundamentals of quantum mechanical phenomena. At the Cluster of Excellence ML4Q (Matter and Light for Quantum Computing), they bring together their expertise in experimental and theoretical physics to create network architectures for quantum computers. There are many problems to be solved – including the question of how quantum computers can be networked, even though the quantum states they need to function are difficult to keep stable. 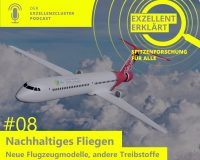 Prof. Jens Friedrichs and Prof. Rolf Radespiel from the Cluster of Excellence SE²A (Sustainable and Energy-Efficient Aviation) in Braunschweig have an ambitious goal: by 2050, aircraft should be flying sustainably. This means that they will then no longer be in the air with fossil kerosene, but with either electric power, hydrogen or synthetic kerosene. These new-generation aircraft will no longer have much in common with the ones we know. 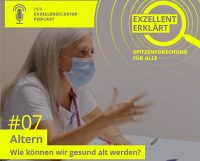 Prof. Maria Cristina Polidori and Prof. Björn Schumacher both conduct research on the topic of aging at the Cluster of Excellence CECAD (Cellular Stress Responses in Aging-Associated Diseases). Prof. Polidori is a doctor at the university hospital with the aim of becoming active in old age before illnesses occur. Prof. Schumacher works in the laboratory where an aging clock, a genetic test, is intended to provide information on how our biological age changes – for example through factors such as unhealthy diet or smoking. With this precise measurement method, it may soon be possible to document the success or failure of therapies at an early stage and then to readjust them. 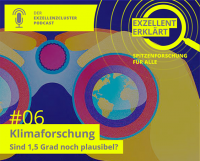 Prof. Anita Engels and Dr. Christopher Heidemann conduct research at the Cluster of Excellence CLICCS (Climate, Climatic Change, and Society) in Hamburg. The Hamburg Climate Futures Outlook is a report that identifies ten key factors that are significantly involved in climate change from a sociological perspective. These include, for example, people’s consumption behavior, but also the so-called divestment movement on the financial market. Are these factors pointing in the right direction? Is it plausible, then, that we will meet our climate targets? The Outlook comes to a sobering conclusion. 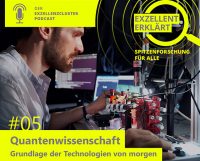 Prof. Harald Weinfurter and Prof. Kai Müller are conducting research at the Cluster of Excellence MCQST (Munich Center for Quantum Science and Technology) in the field of quantum communication. On the one hand, this involves transmitting quantum information over long distances. And on the other hand, it involves distributing a key for data encryption to distant partners in an absolutely tap-proof manner. But before the podcaster Larissa Vassilian talks about the current research with two scientists, some basics of quantum physics have to be explained, for example the principle of superposition or entanglement. 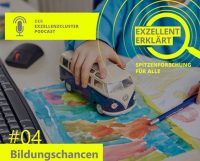 What is the pandemic doing to our children and teenagers? What can we do to help children, no matter what family background they come from? And how fair is our education system? These kind of questions adresses the economics cluster ECONtribute (ECONtribute – Markets & Public Policy) from Bonn and Cologne. You want to know the answers? Then listen to the 4th episode of “Exzellent erklärt” – the podcast of the German Clusters of Excellence. 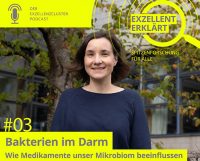 Did you know that the bacterial composition in your intestine is as unique as your fingerprint? Or that these little microorganisms strongly influence how your respond to pharmaceuticals? Learn more about these fascinating topics in the current episode of “Exzellent erklärt”. This time with the Tübingen Cluster of Excellence CMFI (Controlling microbes to fight infections). Dr. Lisa Maier is specializes in the gut microbiome. In her group, she researches antibiotics and other drugs to find out to what extent they affect the health of our gut microbiome. Some of them have positive effects (sometimes unintentionally), while others harm the community of microorganisms in our gut. Finding out exactly which drugs cause which effects is the goal of Lisa Maier’s research. 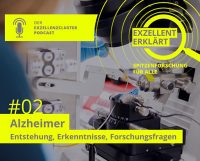 Prof. Christian Haass has been conducting research on Alzheimer’s disease for 30 years. The disease is affecting more and more people in our aging society. It is not curable – but is there a prospect of drugs against it or even a vaccination? The Cluster of Excellence in Munich SyNergy  (Munich Cluster for Systems Neurology) brings together a wide variety of institutions to get to the bottom of Alzheimer’s and other brain diseases: there are SyNergy working groups at the TUM, the LMU, the DZNE, at two Max Planck Institutes, at both university hospitals and also at the Helmholtz Center. Larissa Vassilian talks to Prof. Haass about the research results so far, about the biggest problems in Alzheimer’s research and about the questions that remain open. 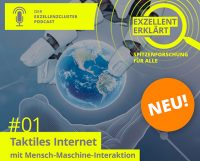 In the first episode, everything revolves around the cooperation of humans and machines, in short: the tactile internet. Scientists from the Cluster of Excellence CeTI (Center for Tactile Internet with Human-in-the-Loop) in Dresden talk about their research and visions: “When I’m at home in my old age and have trouble getting out of my chair, couldn’t my trousers help me stand up?” asks Prof. Frank H. P. Fitzek, for example. At CeTI, experts from  different fields explore the various possibilities of the tactile internet: Intelligent clothing is intended to help people stay independent in old age, or to support them in learning new skills such as playing the piano. In the near future, it should be possible to send not only images and sound but also touches via the internet.