Scientists from LMU have unlocked the full potential of graphene – a single atom thick material – for fluorescence microscopy. Beside applications such as biological assays the study shows a microscopy resolution world record of 3 nanometer. This result might turn graphene into the new standard platform for state-of-the art microscopy. 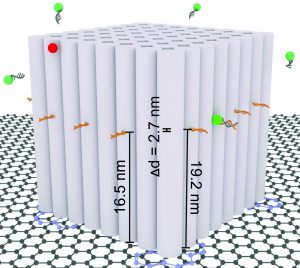 2D materials with a thickness of a single atom are of broad interested for alternative energy sources, batteries and medical applications. The elaboration on the outstanding properties of graphene has been rewarded with the noble price in 2014 and underlines the impact of this material in the field ever since. In microscopy applications, graphene can be used as an energy acceptor absorbing the energy of a fluorescent molecule close to its surface.

Therefore, the brightness of such a fluorescent molecule depends strongly on its distance to graphene: The closer they are the more energy is transferred and this reduces the fluorescence. By measuring the brightness scientists can determine distances between fluorophore and graphene surface of only about 40 nanometers. This allows to measure scales as small as a molecule itself.

The team of Prof. Philip Tinnefeld (LMU Munich) and their colleagues from the Polish Academy of Science Warsaw have now optimized the necessary graphene transfer to glass and investigated the influence of graphene on different fluorescent molecules. To accurately place these molecules with a defined distance on graphene, the scientist took advantage of tiny biological structures. They are composed of nucleotides – the same building blocks of the human DNA. The scientists are able to program the sequence of the nucleotides to form arbitrary structures. They are named “DNA origami structures” referring to the Japanese tradition of folding paper into different forms and shapes. The groups from Munich and Warsaw used the method to form nanometer pinboards and equipped them with a whole series of self-designed static and dynamic structures with fluorescent molecules. They attached the structures to graphene to apply its energy transfer for the fields of biophysics, biosensing and superresolution microscopy.

Three nanometers: A resolution which has never been shown before
Johann Bohlen, one of the first authors, explains the impact of their current results: “By adding graphene, we could also resolve a resolution under 3 nm which has never been shown before. Previous publications came only close to this resolution with the help of complex setups or manifold calibration. Our approach will enable high resolution experiments for many labs around the world, at the small cost of graphene samples.” Before the scientists could start with their experiment they had to establish a method for the transfer of graphene on glass coverslips with a pristine quality. To achieve this goal, they tested in total ten different methods and quantified those with three microscopy techniques.

Graphene as a sensor
Graphene can also be implemented as a sensor. The first example are biological sensors where modified DNA origami structures can be seen as a switch. In the “off” state only a weak shining fluorescent molecule is observed. After adding a specific DNA sequence, the switch is put to the “on” state and the brightness of the fluorophore increases. The second example are dynamic sensors. Scientists realized another method of biological targeting via measuring the fluctuations of a flexible DNA strand, a so-called tether. They showed that the movement of the tether is affected by the viscosity of the environment and more importantly by the mass of an attaching bio molecule.

The two recent publications of the Tinnefeld group illustrate how to transfer and apply graphene for single-molecule experiments. And they clearly sum up a lot of graphene-based applications for a broad range of scientists. The authors are convinced that the ease of implementation of this method to laboratories all over the world might answer scientific questions in the area of energy conversion and medical applications.

Both publications were a cooperation of the following groups: Prof. Philip Tinnefeld (LMU Munich), Dr. Izabela Kaminska (Institute of Physical Chemistry of the Polish Academy of Sciences in Warsaw) and Dr. Evelyn Plötz (LMU Munich).