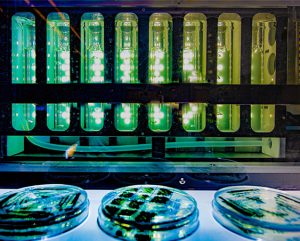 Biologists led by e-conversion member Dario Leister want to give photosynthesis a helping hand. With the goal of increasing crop yields, they are using algae to accelerate the genetic adaptation of crop plants to changing environmental conditions.

Visitors to the laboratories of Prof. Dario Leister are met by an intense green glow. Vibrators on the floor swirl pale green liquids in bulbous flasks, while above, on illuminated shelves, dozens of Petri dishes teem with dark green patterns. Some of the shapes are square, others are round, while yet others resemble sketchy little fir trees such as a child might draw them. Green liquids in large flasks are also bathed in light at regular intervals in a device at the long end of the laboratory room in Martinsried. This creates colorful effects not unlike the marks made by a fistful of thick colored pencils in every shade of green. “We grow cyanobacteria here,” says Leister…