Soak up the sunlight and swim in the dark

Soak up the sunlight and swim in the dark 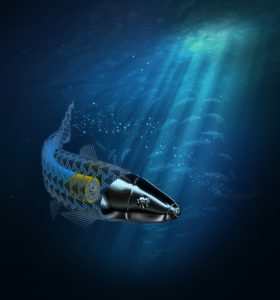 Visualization of a microswimmers

Microswimmers are small particles that actively move in liquids. But they need a continuous energy supply. Thanks to a light charging mechanism co-developed by e-conversion members, microswimmers can now also move in the dark. This makes them interesting for medical applications.

The term microswimmer includes all actively swimming and few-micrometer-sized particles such as sperm, bacteria or artificially created bodies. Their propulsion mechanisms and energy sources are correspondingly diverse. A prominent example are particles made of semiconductor materials that move thanks to light-induced chemical reactions with their environment. The energy they require stems from light they absorb. Therefore, until now, semiconductor microswimmers could not operate in the dark. Scientists from e-conversion and colleagues have now equipped the particles with a sophisticated charging function that allows them to continue swimming without light. This ability makes them interesting for drug delivery. Here, small particles transport active ingredients to their place of use, such as infected tissue in the human body, where light cannot access. The new microswimmers have the best prerequisites for this. Thanks to the internal storage capacity, they move actively for up to 30 minutes, without an additional external energy source, while being made of biocompatible materials. Another possible application could be their use in environmental technology for the autonomous treatment of wastewater.

Metal caps get microswimmers going
Scientists from the LMU Munich and two Max Planck Institutes in Stuttgart are working on this research project together: The groups of the e-conversion member Prof. Bettina Lotsch at the MPI for Solid State Research and at the LMU Munich as well as the group of Prof. Metin Sitti at the MPI for Intelligent Systems. Dr. Filip Podjaski from the Lotsch group is one of the two first authors of the publication and describes the core of the work: “The secret of the propulsion and the energy storage lies on the one hand in the unusual light conversion and simultaneous storage properties of the carbon-based semiconductor material. On the other hand, our microswimmers have two different sides that work together in a tailor-made manner: The basis is a micron sized particle made of a semiconductor material called poly(heptazine imide) – PHI. Half of it is covered by a metal cap. The design can be visualized by imagining the microswimmers as a ball wearing a cap.

PHI is the first ‘sustainable solar battery material’ that couples the functions of solar cells and batteries. We are studying the material with great interest because it can be produced cheaply and in large quantities from renewable raw materials and even from urine. In addition, PHI is amazingly robust and versatile. The second material coating half of the PHI sphere can be platinum, gold or also silicon oxide. The metals are specifically selected catalysts that enable efficient coupling to the environment through surface reactions and thus strongly influence the propulsion. While the semiconductor soaks up solar energy and generates excited electrons and electron holes, the metal cap helps with the charge separation and the surface reactions. But how does swimming and storing energy work exactly? Generally, the light generated electrons and the electron holes react with water or with added fuels such as alcohols or hydrogen peroxide. Due to the two-segment structure, these surface reactions take place more strongly on one side and more weakly on the other. The resulting asymmetry in product concentration are ultimately responsible for the propulsion.

Tiny solar battery
When illuminated, the test particles already move comparatively fast in water. The addition of alcohol has a clearly stimulating effect on all particle shapes examined. However, the trends are different in presence of 0.5% hydrogen peroxide. While gold-coated particles have the highest activity, the microswimmers with platinum move relatively slowly. What at first glance seems a disadvantage explains why only this combination leads to a rechargeable microswimmer. Platinum is an excellent electrocatalyst that decomposes hydrogen peroxide on its own. As a result, it counteracts the light induced propulsion stemming from the PHI side by lowering the difference in product concentration. At first glance, storing energy also seems to be a problem: Like water lost from a tank with holes, many freshly excited electrons react immediately with their surroundings and thus cannot be stored.

However, the organic semiconductor and the platinum electrocatalyst can also act together synergistically so that excited electrons can be stored in the solar battery material PHI for propulsion in the dark. The scientists assume that the reason behind this observation is believed to be the high efficiency of Pt for the oxidation of H2O2, thus playing the role of an electron acceptor. Then, electrons are transferred from the Pt cap to the PHI side, where they recombine with photogenerated holes. Consequently, light generated excited electrons on PHI cannot fall back and stay available for the “solar battery swimming”. The ratio of charging time to duration of movement would be fantastic for standard electric cars: 30 seconds of sunbathing for up to 30 minutes of swimming in the dark.

At first sight, alcohol and hydrogen peroxide rule out an application in human tissue. However, Bettina Lotsch and her team are already one step further. “There are other substances in the body that assist light driven swimming and charging,” explains the chemist. “We are currently investigating the corresponding possibilities of organic microswimmers. Our initial results show that light driven swimming, charging and the transport of active substances will be feasible even in physiological conditions.”