We are happy to welcome Sossina M. Haile, an outstanding Professor of Materials Science and Engineering at Northwestern University and one of the leading experts of energy conversion, here at e-conversion.

We hereby would like to invite you to her talk: 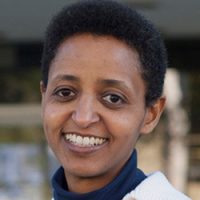 Sossina M. Haile is the Walter P. Murphy Professor of Materials Science and Engineering at Northwestern University, where she also holds an appointment in Applied Physics and a courtesy appointment in Chemistry. She assumed her position at Northwestern University in 2015 after serving 18 years on the faculty at the California Institute of Technology, prior to which she had been on the faculty of the University of Washington. She earned her Ph.D. in Materials Science and Engineering in 1992 from the Massachusetts Institute of Technology. As part of her studies, she spent two years at the Max Plank Institute for Solid State Research, Stuttgart, Germany, first as a Fulbright Fellow, then as a Humboldt Post-Doctoral Fellow. Her research broadly encompasses oxide materials for energy technologies. Her awards include an American Competitiveness and Innovation (ACI) Fellowship from the U.S. National Science Foundation in 2008 in recognition of “her timely and transformative research in the energy field and her dedication to inclusive mentoring, education and outreach,” the 2010 Chemical Pioneers Award of the Chemical Heritage Foundation, the 2012 International Prize in Ceramics of the World Academy of Ceramics, and the 2020 Turnbull Lectureship of the Materials Research Society. She currently serves on the editorial boards for the journals Joule, MRS Energy and Sustainability, and Annual Reviews of Materials Research, and is a Fellow of the Materials Research Society, the American Ceramics Society, the African Academy of Sciences, and the Ethiopian Academy of Sciences.

Prof. Haile will talk about:

Cesium dihydrogen phosphate, CsH2PO4, has received increasing attention as a fuel cell electrolyte because of its anhydrous proton transport characteristics at intermediate temperatures. Hydrogen powered fuel cells with peak power densities of over 400 mW/cm2 at 250 °C have been demonstrated, as has high tolerance to impurities, including CO, H2S, and NH3, in the fuel stream. Key challenges in the use of CsH2PO4 derive, however, from its tendency towards dehydration at the high temperatures > 228 °C, required to transform the material into its high symmetry, disordered, highly conductive phase. These limitations motivate an investigation of chemical modifications in search of enhanced properties. We describe here our discoveries in three chemical systems: CsH2PO4-RbH2PO4 and CsH2PO4-KH2PO4, and CsH2PO4-H3PO4. The first displays typical solid solution behavior in both the superprotonic and near ambient-temperature ordered phases. The second displays eutectoid behavior, a eutectoid superprotonic transition temperature of 203 °C, significantly lower than the 228 °C of pristine CsH2PO4. The CsH2PO4-H3PO4 system displays truly remarkable characteristics. First, we find a new superprotonic compound of stoichiometry Cs7(H4PO4)(H2PO4)8. The structure of this new compound can be described as a superstructure of cubic CsH2PO4 with one in eight Cs cations replaced by the highly unusual polycation H4PO4+. Second, we find a wide composition range for the superprotonic phase Cs1-xH2+xPO4, which includes conventional pristine (or stoichiometric) CsH2PO4. The eutectoid superprotonic transition in this system is just 155 °C. Structural studies indicate that Cs deficiency in superprotonic Cs1-xH2+xPO4, termed α-CDP(ss), is accommodated by Cs vacancies that are charge balanced by excess protons incorporated onto the phosphate groups. Surprisingly, H+ substitution into CsH2PO4 has almost no impact on the conductivity, whereas Rb and K substitutions decrease the proton conductivity markedly. Proton doping thus represents a powerful new approach to the creation of superprotonic compounds.