The toolbox always at hand

The toolbox always at hand 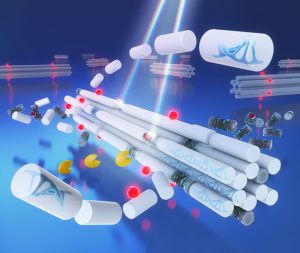 How do you repair the world’s smallest machines? The best way is to let them do it on their own. Many nano-machines are made of artificial DNA building blocks, and a group from the e-conversion cluster has now shown that this material can replace its own defective parts by itself.

The world’s smallest machines consist of only few individual molecules. Some can perform movements in response to a signal, serving as tiny switches or pumps. Others are able to bind specific molecules and place them on surfaces with nanometer precision or to couple them with one another. So-called DNA origami structures are specialized in these functions. Just as the Japanese art of paper folding they consist of artificial DNA molecules folded into a three-dimensional structure in a defined way. Among other things, the precise placement of components enabled by DNA origami plays a crucial role in the energy transfer applications. DNA origami structures could, for example, optimally arrange components needed for artificial photosynthesis and optimize the energy transfer in this future technology.

Nanometer ruler as test object
Molecular machines, however, are susceptible to damage by light and degradation by enzymes. Screwdrivers and combination pliers will not get you anywhere here. Fortunately, e-conversion scientist Professor Philip Tinnefeld (Department of Chemistry, LMU Munich) and his team discovered the perfect solution: Using a DNA nanoruler as test object they showed for the first time that defective DNA origami structures can regenerate on their own and repair themselves.

Nanorulers are rigid bundles of DNA strands. They are not a molecular machine in the strict sense, but the self-repair principles developed in this study can be certainly transferred to more sophisticated nanomachineries. With DNA nanorulers one can determine the maximum resolution of a microscope and measure objects between 6 and 1000 nanometers in length. As marking points, the scientists attach fluorescent dye molecules to the DNA nanoruler at defined intervals. “In our current publication, however, the fluorescence signals are not only used to measure distances,” explains Michael Scheckenbach, first author of the study. “We use them as evidence of whether the DNA origami structure is damaged or already repaired. Because defective nanorulers do not fluoresce.”

Self-healing
The greatest danger comes from enzymes that cut entire sequences of single-stranded DNA out of the ruler. At the breakage site remains a single stranded region of only a few nucleotides, so called toeholds. They are the key to the repair: The scientists added an extensive mixture of intact single-stranded DNA sections to the solution – with sequences complementary to the previously formed toeholds in the structure. And even in the vastness of the solution the intact DNA with matching sequences will find the corresponding damage site quite fast. The reason behind is quite rational: Only for them, this hybridization provides a positive thermodynamic and kinetic effect. That way nanorulers can be repaired and made more durable even in damaging environments.

“This type of repair we entitled self-healing because the “wound” must be repaired and thus “healed” in a damage-specific manner,” says Michael Scheckenbach. “Another of our DNA origami structures suffers from the destruction of its fluorescence molecules by light. And it is also able to help itself. We call its type of repair self-regeneration.”

Self-regeneration
Imagine this object as a 3D folded structure set with 100 shining fluorescent dye molecules acting as tiny lightbulbs on the nanoscale. The scientists developed it as a brightness reference for the analysis of other fluorescent objects. The start-up GATTAquant, which emerged from the Tinnefeld group, is already selling the standard as a product for high-resolution microscopy. However, continuous lighting destroys the fluorescent molecules and has so far made it a disposable item. With a clever trick, the Munich chemists circumvented this problem and made its recycling possible. They shortened the connection by which the fluorescent molecules are attached to the 3D structure. As a result, they detach every 3-10 minutes and can be dynamically replaced by “fresh” molecules from the surrounding solution. After about three hours, all defective parts have been changed, the fluorescence signal is 100 percent regenerated, and the tiny DNA light bulb ready for use again.

So far, DNA origami have been stabilized mainly by coating or by the addition of protective enzymes. The autonomous dynamic exchange of defective elements offers fundamental advantages and can be combined with existing strategies. “This brings us closer to the sophisticated mechanisms of living organisms, in which complex repair machinery is used and in which continuous renewal is the standard,” explains Professor Philip Tinnefeld. “Next, we would like to apply these self-repair principles to molecular sensors designed to reliably measure concentrations in complex environments, where the resistance against damage is essential.”
(Author: Birgit Ziller)