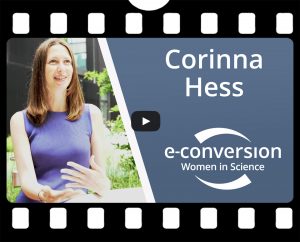 Is their really still something special about being a female scientist in the 21st century??? Yes, it is!
In our series female e-conversion members talk about their research, their career and in which context it makes a difference being a woman.

“What? You are a professor?? And in chemistry???”
These were the words of the hairdresser when Corinna Hess told her what she was doing for a living. Corinna Hess is an assistant professor of Bioinorganic Chemistry at the Technical University Munich (TUM) and specializes in the development of molecular catalysts for energy related processes. One example is optimizing the production of hydrogen for use in fuel cells. In our video Corinna Hess not only talks about being a woman among many male scientists but also about the relationship between female scientists. And she holds some helpful tips…