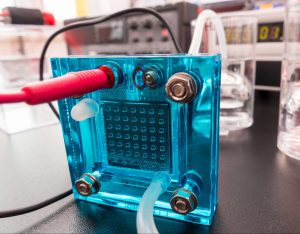 The e-conversion cosmos is full of exciting projects. In this series we present key topics of energy research on the basis of current publications from our cluster and give an insight into the daily work of our members.

One could call fuel cells frugal creatures. They are content with oxygen and hydrogen and willingly convert both into electricity and water (see fuel cell principle). Usually, oxygen from the air is ­already sufficient. However, users may have to spend a lot of money on hydrogen, because its sustainable production by electrolysis is still rather expensive. In our first example [1] we show how ­e-conversion scientists succeed in making the central chemical reaction of hydrogen production run much more efficiently. The second publication [2] is all about platinum. This expensive precious metal sits in tiny particles on the cathode of the fuel cell and catalyses the reduction of oxygen. Thanks to the experts at e-conversion, the reaction with less platinum works even better than before. 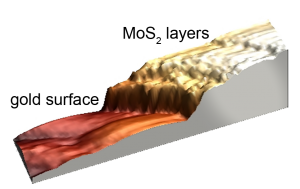 With rough edges to more hydrogen
Molybdenum is a versatile element. The plant and animal ­metabolism needs it as a vital mineral. Industry uses the metal to harden steel or in lubricants. And last but not least, molybdenum selenide and molybdenum sulfide are excellent ­catalysts for hydrogen production. Both substances are layered systems, similar to a stack of paper. The surface is atomically smooth, the side edges are rather stepped like a stack of paper that is quickly folded. It is already known that the hydrogen evolution reaction (HER) is less efficient on the surface of the materials than on the sides. A group of e-conversion members got to the bottom of this phenomenon and investigated exactly where the catalytically active centers are located and how one can increase their number. 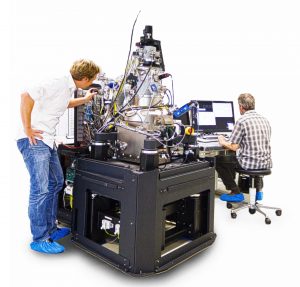 Using an electrochemical scanning tunneling microscope (ECSTM), they followed the behavior of individual molecules in real time. The 3D image (see right) visualizes the measurement results of a gold base with several layers of molybdenum sulfide. While scanning the surface, the highly specialized microscope detects whether and how the tunnel current between the surface and an atomically thin tip changes from atom to atom. Elmar Mitterreiter, one of the first authors of the publication, explains the result: “In places where the tunnel current changes significantly, the catalytic activity and thus the amount of hydrogen produced is particularly high. In our experiments we were able to prove that smooth surfaces are hardly active at all. At corners, edges and steps significantly more hydrogen is produced. That is why we tried to deliberately destroy the surfaces of the materials by removing single atoms.“ The scientists created these so-called defects with the ion beam of an impressively large helium ion microscope (see left). The success was clear: the catalytic activity on the previously almost inactive surface increased dramatically and the overall activity of the material doubled.

43 atoms are perfect
For fuel cells to become interesting for the mass market, not only the cost for hydrogen must be reduced. Also the fuel cells themselves are still too expensive. One reason is the high price of platinum. The precious metal sits on the cathode in the form of particles only a few nanometers in size, where it catalyzes the reduction of oxygen. The scientists at e-conversion asked the question of how many platinum atoms the particles must consist of for the most efficient catalysis. The result is impressive: particles consisting of only 43 platinum atoms show a catalytic activity on one electrode that is twice as high as that of commercially available specimens.

Simulation of a nanoparticle with 43 platinum atoms. Diameter: 1.1 nanometers (B. Garlyyev, TUM)

For the publication, two e-conversion groups from the chemistry and physics departments of the TU Munich worked closely together. In the first step, the three first authors Batyr Garlyyev, Kathrin Kratzl and Marlon Rück predicted by computer simulation that, among others, particles consisting of 43 atoms with a diameter of ­1.1 nanometers have a particularly high catalytic activity. In principle, each platinum atom of a particle can bind an oxygen molecule and thus act as a catalyst. Whether and how active it actually is is determined by the strength of the bond: if it is too weak, the molecule is released before the reaction. If it is too strong, it will stick afterwards. “The binding energies and thus the catalytic activity are largely determined by the number and arrangement of the platinum atoms – that means the nanostructure of the particle,“ explains Marlon Rück. ” With the corresponding data we were able to develop catalysts, first on the computer and later in the laboratory, that are precisely adapted to the reduction of oxygen.”

The synthesis was extraordinarily challenging. Kathrin Kratzl describes the method she developed herself: “First, we used an electrode to deposit very small platinum particles in the pores of a so-called metal-organic framework. This prevents the particles from sticking together and makes it easier to modify them. The scaffold is then dissolved slowly and in a controlled manner using an acid to release the platinum particles on the electrode.”

It will still take a while before fuel cells hit the market at a bargain price. However, the motivation of the ­experts is high and e-conversion and laboratories all around the world continue to work ­diligently towards this goal.