Getting the most energy out of the sunlight

Getting the most energy out of the sunlight 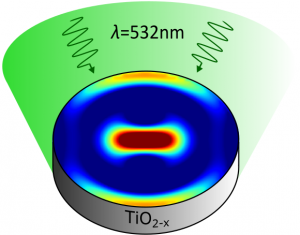 Photocatalysis allows to chemically store the energy from sunlight directly. One example is the splitting of water into oxygen and hydrogen – the most important renewable fuel needed for fuel cells. Although the principle of photocatalysis has been known for a long time, it has only been used to a very limited extent. The conversion from one form of energy to another is not efficient enough. One reason is the low optical absorption of the photocatalysts, because their materials are mostly transparent in the visible spectrum.

A team around the e-conversion members Prof Stefan Maier, Prof Emiliano Cortés and Prof Ian Sharp from LMU Munich and TU Munich now demonstrated that the low absorption can be significantly increased using nanophotonic methods. Depending on the choice of catalyst material the increase is up to 150%. The physicists have also managed to vary the spectral position of this enhancement mechanism in a controlled manner so that the concept can be applied to other materials. In the next step, the researchers will quantify the increased photocatalytic efficiency on scaled-up samples with several million of these nanoresonators.

Picture: The disk-shaped geometry of the titanium dioxide nanoparticles amplifies the electric field and thus the energy yield in the sunlight spectrum. (L. Hüttenhofer, LMU)