Open House Day at the LMU Faculty of Physics

Hands-on physics for everyone

Open House Day at the LMU Faculty of Physics 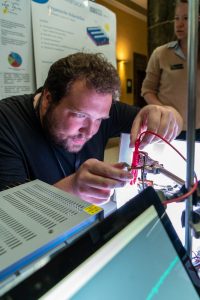 On 4 May 2019, the e-conversion cluster was part of an impressive journey through the whole world of physics: the LMU Faculty of Physics had organized an Open House Day at the LMU main building to present its entire spectrum of research. More than 2,500 people came to attend the broad range of talks, lectures, workshops and lab tours.

There was a heavy rush already at the opening ceremony at 11 am: When Professor Ralf Bender, the Dean of the Faculty, gave his welcoming address, every single seat of the Audimax was occupied. Professor Harald Lesch held the keynote lecture by giving an entertaining overview of the research fields of the faculty.

In the central hall, the Lichthof, scientists presented their research at numerous information booths: Astrophysics, Biophysics, Elementary Particle Physics, Laser Physics and Quantum Optics, Mathematical Physics, Medical Physics, Meteorology, Nanophysics, Physics Education and Solid State Physics. At the e-conversion booth PhD students offered hands-on experiments on the production of hydrogen and the principles of organic solar cells. Especially for the younger visitors the cluster had organized the “e-conversion research workshop”. Here the children could perform simple experiments on renewable energies such as batteries made from lemons.

At other workshops, the potential future scientists investigated the physical concepts of toys or worked with photonic devices to detect the diameter of a human hair. The grown-ups could join various laboratory tours to get insight into the daily work of scientists in quantum optics and solid state physics. At the lecture halls, the visitors had the chance to listen to talks on current research topics and even a special “family lecture”. Two original physics lectures allowed the audience to get a kind of “real student feeling”. In addition, pupils could talk to current physics students. For those who already considered taking up a study of physics the faculty booth provided all necessary information.

A special feature of the Open House Day was the exhibition “Physics of Climate Change”. The aim of all participants was to explain the processes and reasons of the climate change. The focus was on the measurable effects on the environment in Bavaria and solutions to stop that development. Among the exhibitors were members of the LMU Atmospheric Physics and Meteorology, the German Aerospace Center (DLR), the Deutsche Allianz Klimawandel (KLUG), the Teachers Network Climate Change and the Ministry of the Environment, as well as representatives of the “Fridays for Future” movement.

For visitors as well as for participants the Open House Day at the Faculty of Physics was a great success. And the e-conversion cluster is looking forward being part again next year. (IA)