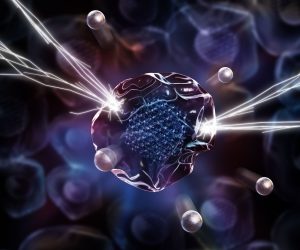 The ions in a solid state battery need to travel through multiple material interfaces which comes along with several challenges. e-conversion scientists from the TU Munich and colleagues from the Fritz-Haber-Institute and the Forschungszentrum Jülich now shows that nano-scale coating at these interfaces may in fact stabilize the battery.

They are considered the next generation of mobile energy storage: solid state batteries. They promise increased driving range and they are safer than the conventional batteries containing organic liquids which are installed in almost all electric vehicles. This liquid – the electrolyte – comes with many drawbacks: it ages faster than solids and is easily flammable. In car accidents, where the battery is exposed to mechanical stress and may potentially leak, this is especially dangerous. The next generation of electric cars aims to avoid exactly these safety issues while simultaneously storing more energy. Therefore, large automotive manufacturers, such as BMW, Daimler, Ford and Volkswagen, boost their investments into the development of high performing solid state batteries.

Many boarders to cross
To date the commercial utilization of solid state batteries however is not yet competitive. Since with new possibilities there are also new challenges. During charge and discharge, ions – currently lithium ions – have to travel back and forth between the poles inside a battery. The mobile ions in a solid state battery, instead of moving through a liquid, now have to surpass multiple solid phases. It thus needs to be ensured that these ions do not hit high barriers especially at material and grain interfaces. That is because the electrolyte, the ion conducting medium, is no longer comprised of a homogenous phase but rather of many conjoined solid grains. For the ions to diffuse through continuous paths, the loose grains are sintered at high pressure during synthesis. During this process, a thin film forms at the interfaces which connects the grains and allows for a good ion transport.

Positive side-effects
The role of the newly formed contact layers has been long in doubt in solid state battery research. It was assumed that the changes at the solid-solid interfaces in the battery was related solely to undesirable features and it was therefore attempted to minimize their extent. A team of scientists of the Fritz-Haber-Instituts (FHI) of the Max-Planck-Gesellschaft, the Technical University of Munich (TUM) and the Forschungszentrum Jülich have just discovered that these interfacial changes are not necessarily disadvantageous but may in fact have a positive effect. To find this out, the team analyzed the function of a grain boundary inside a battery at the nano-scale. „This is largely uncharted water in solid state research,” states Prof. Rüdiger-A. Eichel, director at the IEK-9 of the Forschungszentrum Jülich and professor at the RWTH Aachen. „Until now focus has been drawn mainly on meso- and macroscopic investigations. However, these do not get close enough to the scene of action.“ With computer simulations and experimental studies, the team around Dr. Christoph Scheurer of the FHI has managed to characterize the interphases on an atomistic level. The researchers have found that the interphase can actually contribute to the electrochemical stabilization of the battery.

Protective coating
The reason: the formed interphases suppress the nucleation of lithium dendrites. These tentacle-like structures may form when electrons and lithium ions meet in the battery. They combine and shape extended branches which may quickly result in battery failure. Once a metallic dendrite connects anode and cathode, the poles inside the battery, a short circuit forms and the battery fails. „The naturally forming, extremely thin layer between the grains inside the battery can be thought of as a protective coating which inhibits just that“, explains Sina Stegmaier, PhD student at the TUM and member of the e-conversion graduate program. These insights could substantially impact the engineering of solid state batteries in the near future. Targeted interfacial engineering towards the formation of such protective coatings could be a promising route to suppress dendrite formation and thus realize a more durable next generation of safer batteries.
(Source: Fritz-Haber-Institute )